Everyone loves an underdog, particularly when dealing with a nontraditional, colorful character like Preston Tucker.  But, Preston, and his car, the Tucker 48, may have remained only a footnote in automobile history if not for the 1988 movie, Tucker: The Man And His Dream.  Because of the exposure from this movie, Preston’s vision of a better car that was not only technically advanced but also safer, became much more widely known.  However, before this car became one of the most coveted classics in existence, Preston Tucker faced significant challenges.  He had to assemble a design team, find suppliers, arrange funding for the project, set up dealerships, and deal with the Securities and Exchange Commission (SEC), all uphill struggles.  These obstacles would have stopped most people, but not Preston, who had a vision of the future automobile, as well as a passion for building a better car.

So, was the Tucker 48 a success story?   Since the company ceased to exist before mass production of the Tucker 48 began, it could be argued that Preston Tucker failed in his objective, at least from a business standpoint.  However, Preston Tucker did bring his vision to life in the form of a fully functioning automobile.   Furthermore, today, more than 70 years later, the Tucker 48 is recognized for its innovative features, and is one of the most sought after domestic classics in the hobby.   You could certainly say that Preston Tucker had the last laugh. 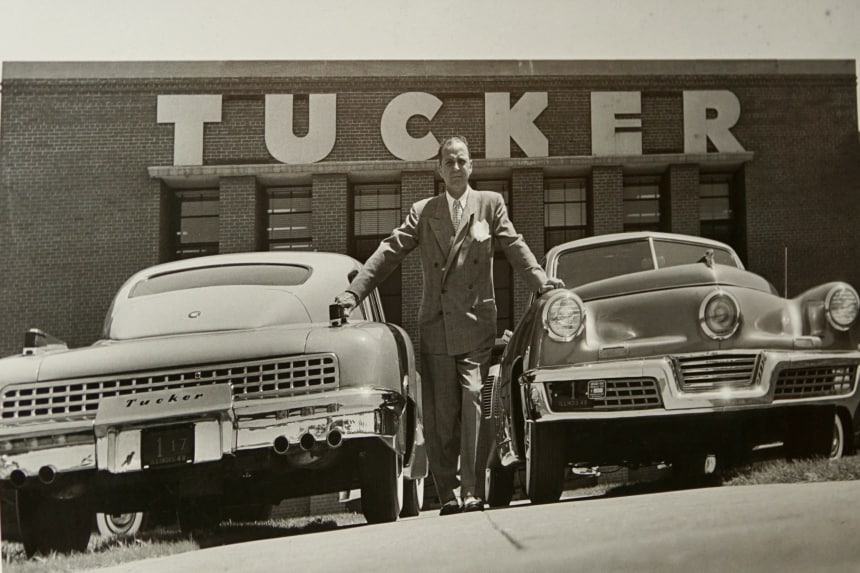 Preston Tucker with a pair of his Tucker 48s

If you had to pick a Tucker out of a lineup, it wouldn’t be difficult. The Tucker 48 looks like no other car, past or present, because it was conceived as a completely new design. Preston was fortunate to enlist the talents of Alex Tremulis, who found inspiration form the streamline look of airplanes of the day. Keep in mind, as you look at this futuristic fastback design, this was 1948.  When compared to other vehicles of the era, it’s totally off the charts. Since the Tucker was built for model year 1948, it was named “Tucker 48.” Occasionally, “Tucker Torpedo” is used to reference the car, but the “Torpedo” moniker was only used during the initial prototype stages. 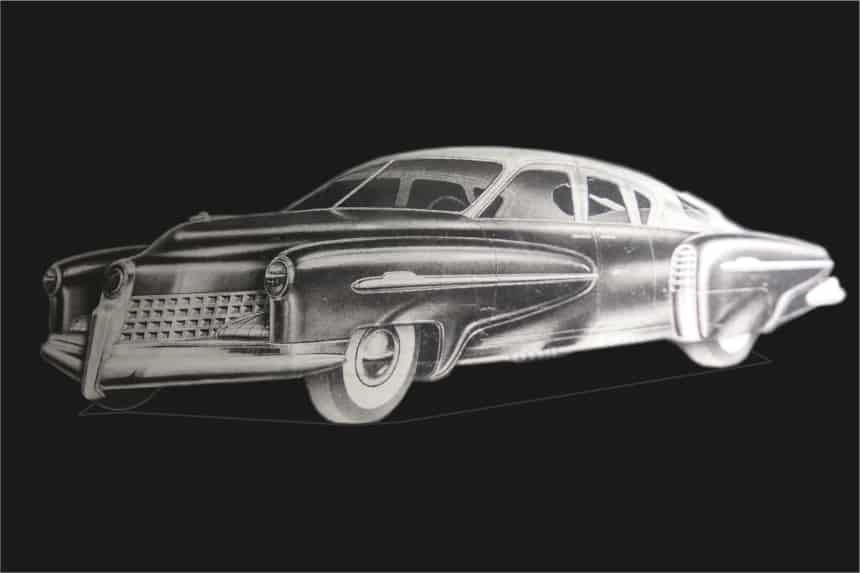 The Tucker 48 was promoted as the first new car design in 50 years. Along with Its futuristic body shape, it has a rear-mounted engine and a third headlight mounted in the center of the hood that pivots in the direction the wheels turn.  It also has a host of safety features, including a padded dash and a window that pops out on impact. In this original Tucker sales video, the test car is shown driving away after it crashed at a speed of 90 MPH. Although this may not equate to today’s National Safety Crash Testing, it is certainly a testament of how well the car was engineered. 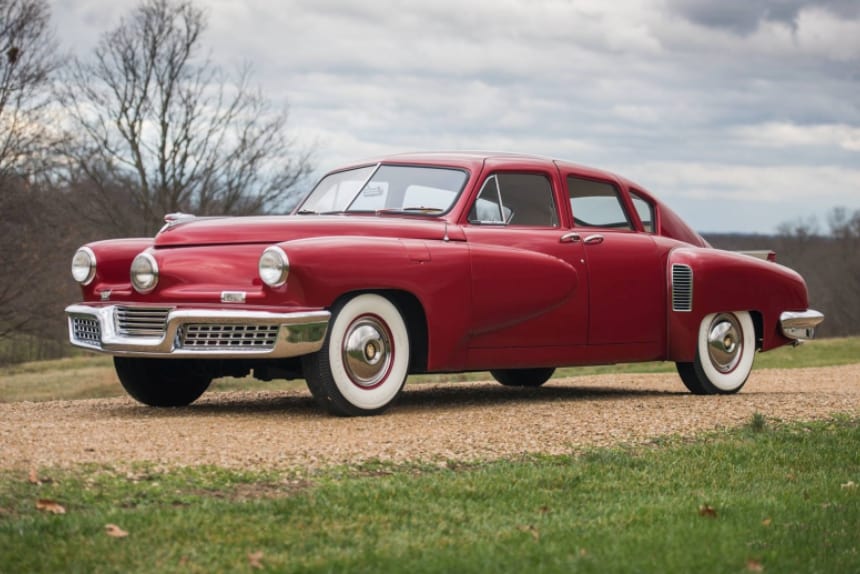 An example of Production Tucker 48

The interior of the Tucker 48 is not what you might expect. Instead of a lot of gadgets and gauges, the cockpit is very simple, actually quite spartan compared to other interiors of the day. The one round gauge, front and center, displays all vital driving statistics.  Levels that operate the auxiliary equipment are located on the left side of the steering wheel. A gear shift stalk, originally designed for the Cord, is on the right. This stalk (Preselector gearbox) is used to engage the 4 speed manual, electronic transmission.  The radio is vertically mounted on the steering wheel pod with “Tucker” spelled out on the station selection buttons.  Advertised as a safety feature, there’s a wide-open space under the dash on the passenger side.  Tucker 48 designers referred to this open space as a safe area for the front passenger in the event of a crash.

The Tucker 48 was designed as a four-passenger vehicle with the rear doors opening backwards in what’s commonly called “suicide doors. “ The car rides on a 4-wheel independent suspension, which was cutting-edge technology for the day. It has a heavily modified six-cylinder horizontally-opposed aircraft engine, which is 335-cid and rated at 166 HP. Preston Tucker further defied conventional wisdom by putting the engine in the rear of the car, a decision rooted in his early years collaborating with legendary Indianapolis 500 race car builder Harry Miller. In fact, Preston spent much of his young adult life learning about the automobile industry through his work for Studebaker, Pierce-Arrow, Stutz, Chevrolet, Ford, and Dodge. The Tucker 48 was his opportunity to show the world his vision of the future automobile.

Trunk in the front, engine in the rear, and ‘suicide doors’ for passengers in the back

Engine in the Rear of the Car

Horizontally opposed 6 Cylinder Engine, Originally designed for a Helicopter and adapted for use in the Tucker 48

Preston Tucker had a lot going in his favor, not the least of which was his passion to bring the car to market. He also had an attention-grabbing design, a good company team to support him, a repurposed WWII factory to build the cars, and capital backing to move the project forward (at least initially).  However, two forces worked against him.

His first obstacle was the negative publicity he received immediately after unveiling his prototype car. In a rush to get the prototype in front of the news media for publicity points, the car was shown without a reverse gear.  Although this was corrected on the first production car, it remained a stain on the car’s reputation.

The second and biggest problem for Preston was the heavy-handed action by the SEC. Having been burned by other startup car companies in the past, the SEC was closely monitoring the fledgling Tucker Corporation, looking for potential misuse of investor funds. In early 1949, the SEC forced Preston to turn over all company records, and subsequently indicted Preston and his top management. The trial, which lasted into 1950, eventually exonerated everyone in the Tucker Corporation, but the suspension of production during the trial unwound all Preston created up to that point. Consequently, he never recovered, and as a result, the only cars produced were in 1948, prior to the SEC’s legal action.

Tucker 48 by the Numbers

Ironically one of the main reasons the Tucker 48 is so valuable today is the fact that only 51 were originally produced. This includes 50 regular production cars and the first prototype, which is affectionately-known as the Tin Goose.   In more recent history, two additional cars were assembled using leftover parts and items salvaged from wrecked Tuckers, referred to as the “continuation” cars.

Each Tucker 48 carries a unique Serial No. starting with 1000 (the prototype “Tin Goose”), and ending with 1050 (the last production line assembled Tucker).  The two continuation cars are identified as 1051C and 1052C.   In addition to having serial numbers, each Tucker also has a Body No., which refers to the chassis.   Note that the Serial No. and Body No. may or may not be the same, but in the below example, both are 1028.  Tuckers are typically identified by their serial numbers.

The Tucker Automotive Club of America has a wealth of historical data on these cars. They report that 47 of the original 51 cars that are accounted for are either in the hands of private collectors or museums, some of which are outside the United States. 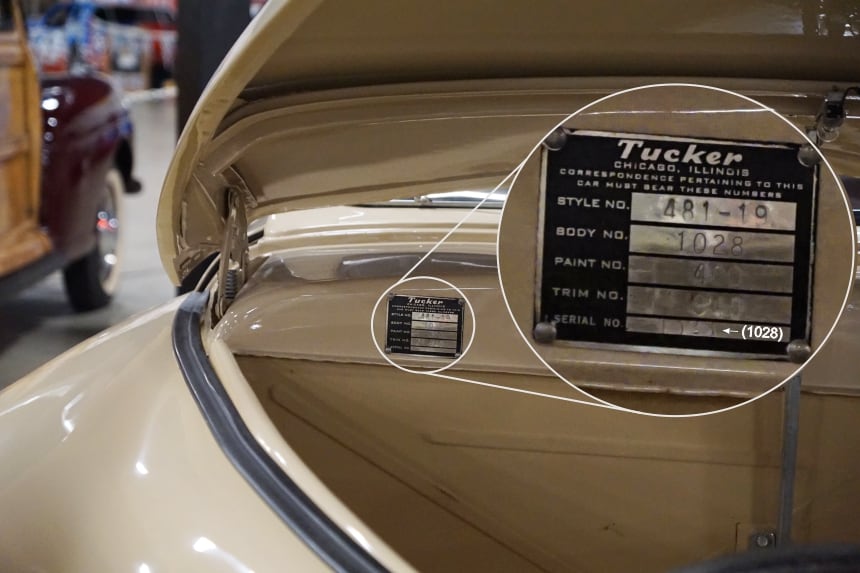 Each Tucker 48 has a unique chassis (body) number on a metal plaque, inside the front trunk

One of the best places to get the “total Tucker experience” is the AACA Museum in Hershey, PA. This museum has not just one, but three, of these super rare cars on display. In fact, a whole wing of the museum is dedicated to the cars. The exhibit includes a collection of historical documents, prototype engines, a cut-away of a Tucker body, and Tucker memorabilia. Here’s a video overview we recorded of this fabulous display.

It doesn’t happen often, but occasionally a Tucker 48 comes up for auction. In 1948, a buyer might have taken a Tucker 48 home for $2,450 (the projected list price), but as you can see from the table below, it will take a 7-figure bank account to buy one today. Here is a list of what the Tucker has sold for in recent years. 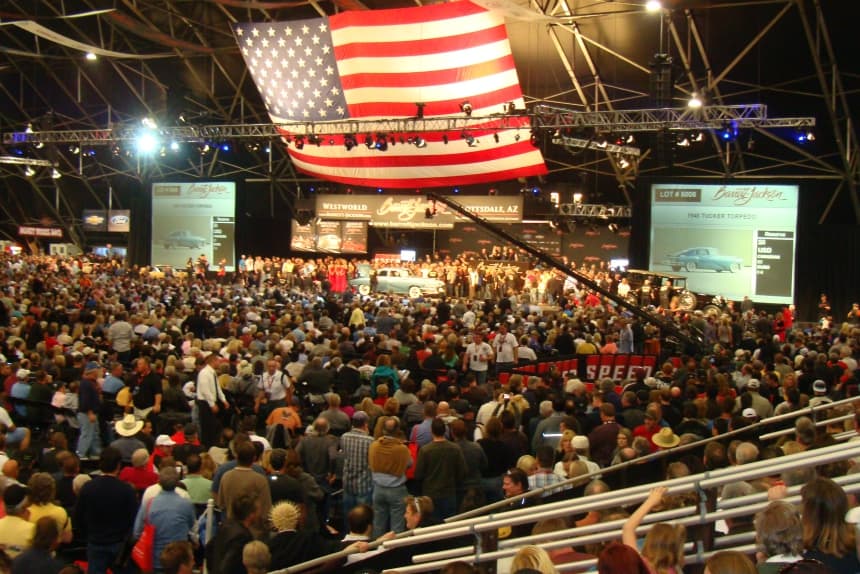 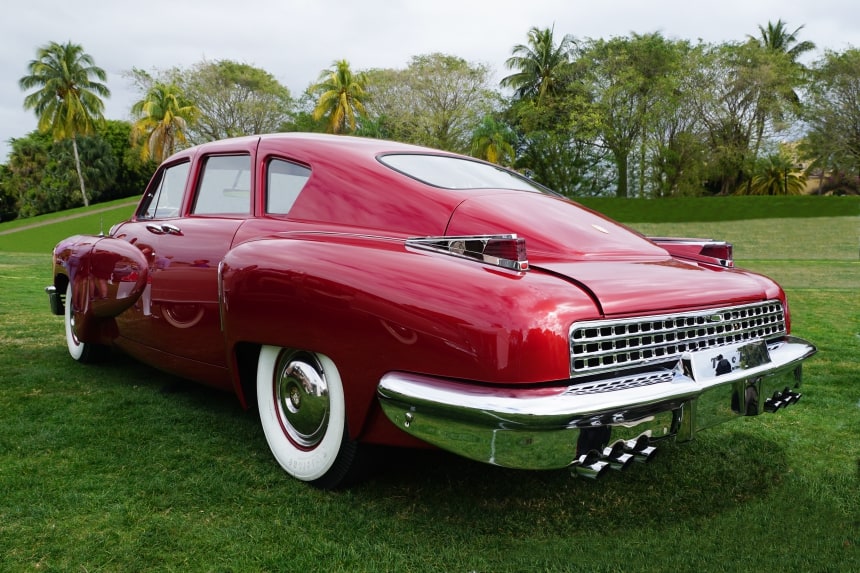