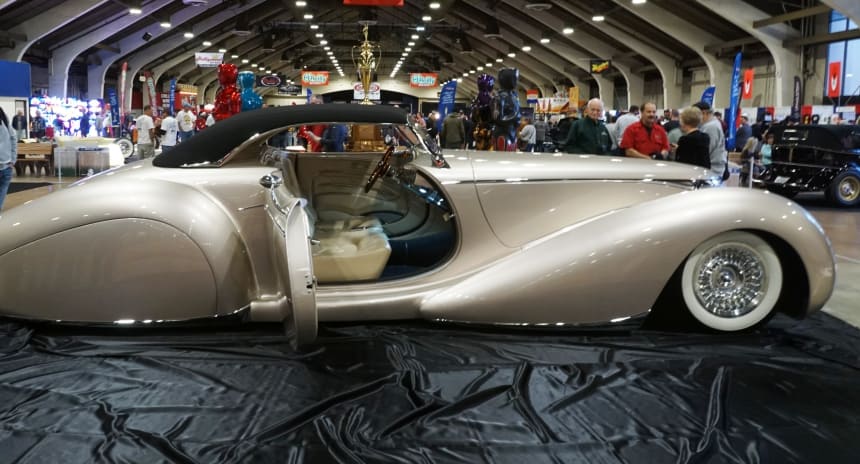 Our fascination with customizing cars probably started the day after Henry Ford told buyers they could get a new Model T in any color – as long as it was black.  There was probably someone who wanted to personalize his car, to make it special and different from all the others.  But, what started back then as only a small tweak to Henry’s design, has transformed, in some cases, to an all-out total redesign of today’s classic automobiles.  Apparently, any vehicle can be a candidate for these makeovers.  The only question, it seems, is how far the owner will push the customization envelope.

High-end custom car building isn’t typically considered a sport, but without a doubt there’s a considerable amount of competition among builders who work at the extreme level of this craft.  In a series of annual national car shows held throughout the year, these recently completed “all-out” customs go head-to-head in the hopes of being crowned the best of the best.

If you are fortunate enough to take home the winning trophy from one of these shows, your vehicle has a permanent place in the history of the hobby.   Here’s the short list of some of the most significant awards in the hobby and the shows that host them. 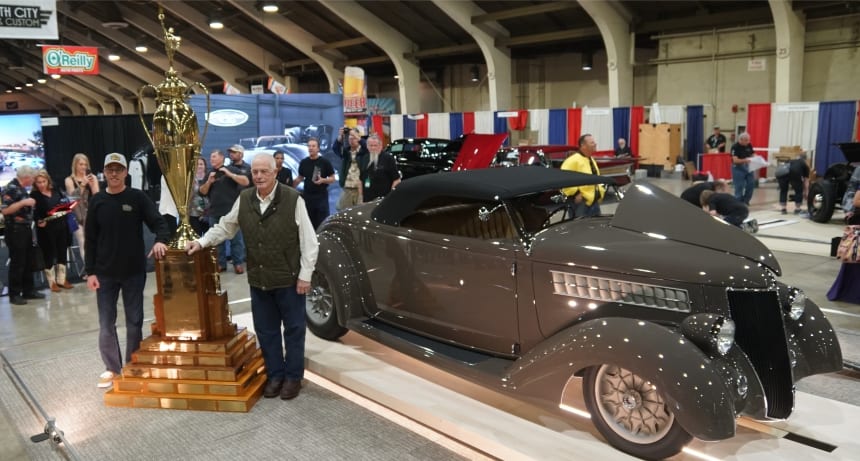 The classic car show season begins in January at the Grand National Roadster Show in Pomona, California.    What started in 1950 as a custom roadster event, now includes all types of classic cars.  However, the event’s focus is still on roadsters, with the all-important award being America’s Most Beautiful Roadster (AMBR), one of the most coveted trophies in the hobby.  Significantly, the invited contenders for this award (approximately 10) must be new Builds that haven’t previously been shown at any public event.   If you win the AMBR, you definitely have bragging rights for the best roadster for that year.

For more about this award show, check out our article on the 2019 Grand National Roadster Show. 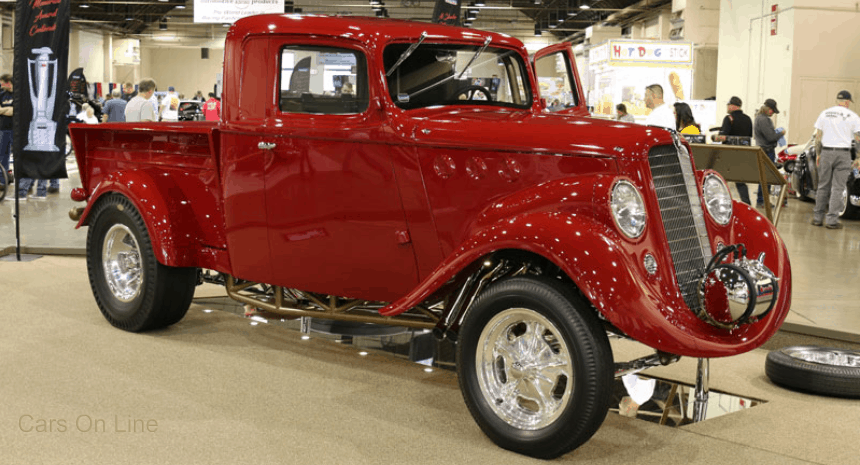 The Al Slonaker Memorial Award, which is a more recent award at the is Grand National Roadster Show, is presented to the best non-roadster custom Build. Beginning in 2020, contenders must be new Builds, which have not previously been shown elsewhere.    There is little doubt that the stature of this award will grow over time, as it begins to attract some of the best new custom vehicles to this premier west coast event. 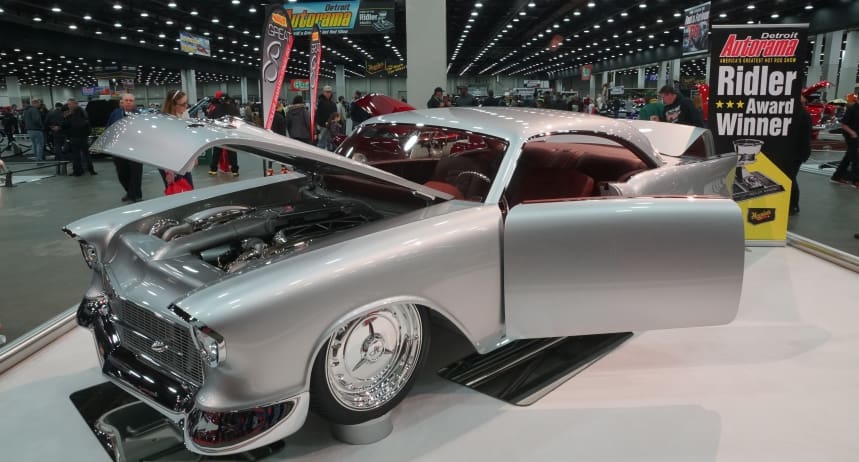 A series of classic car events are held in different cities under the Autorama, World of Wheels, and Cavalcade of Customs show banners.  However, the Detroit Autorama is where the prestigious Ridler Award is bestowed.   Also known as America’s Greatest Hot Rod Show, this event started in 1953 and should be on the bucket list of any custom car owner or builder.  Held a month after the Grand National Roadster Show, the Motor City’s Autorama begins with a field of competitors that have been narrowed down to 8 finalists.  These vehicles must be new Builds that have never before been shown publicly.   Making the cut as a Great 8 finalist is quite an honor, and would be one of the top achievements of any classic car/truck owner, only to be surpassed, of course, by winning the Ridler.

For more about this award show, check out our article on the 2020 Detroit Autorama.

For owners of top custom builds, the first goal is to compete at either the Grand National Roadster Show or the Detroit Autorama, recognizing that once it is shown at one event it becomes ineligible for the second.   However, after these two season openers, there are several other national events that don’t limit the competition to new Builds.  Different judges and different judging criteria provide additional opportunities to showcase these ultimate customs.  So if you didn’t win the AMBR or the Ridler (and even if you did), here are the shows held later in the year , along with the most coveted awards. 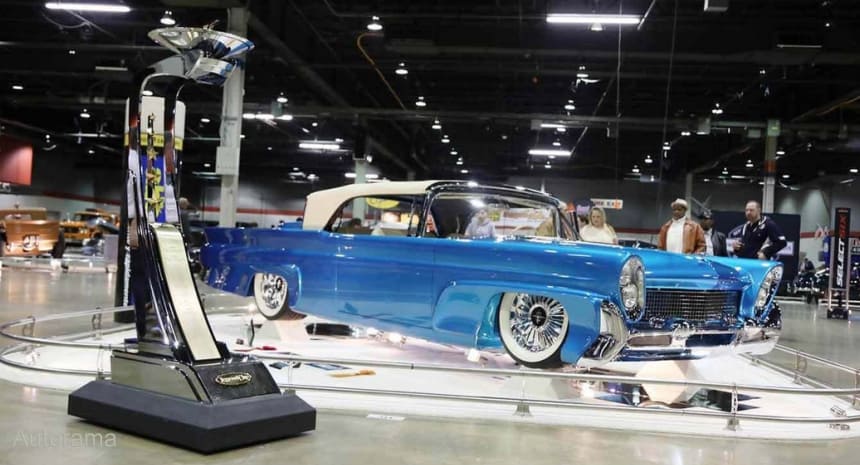 The Chicago World of Wheels, part of the trilogy of show banners with Autorama and Cavalcade of Customs, is held one week after the Detroit Autorama.  This show, which attracts many of the same custom Builds shown previously at the Detroit show, awards the Legend Cup to the top custom build. 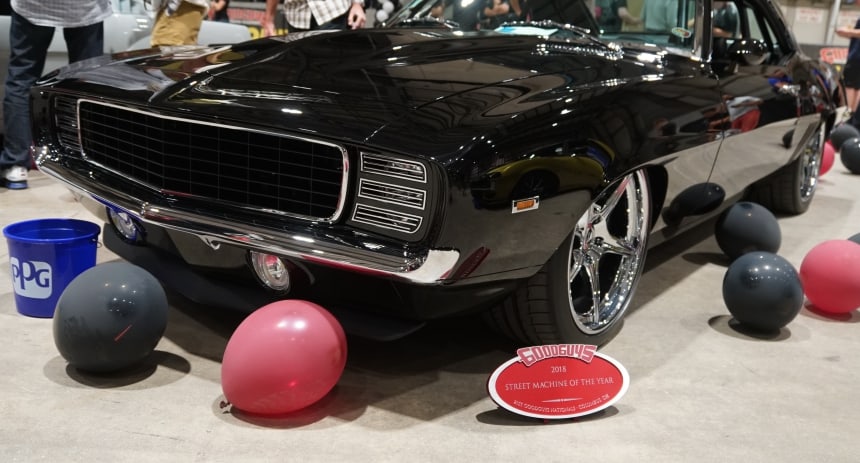 The Goodguys Rod and Custom Association, which hosts about a dozen classic car shows across the country, holds their flagship event in Columbus, OH.  Goodguys presents its two most significant awards at this mid-summer show – Street Machine of the Year and Street Rod of the Year.   To win the Street Machine of the Year award, the vehicle needs to demonstrate its functionality by running an autocross course.  There are no extra points for the fastest times, but the crowd loves to see these bad machines maneuver around the cones, particularly if a good donut burnout is added in for good measure.

Note: The Goodguys Columbus, OH event was cancelled in 2020 because of COVID-19.  The awards mentioned above were presented at the Goodguys Des Moines, IA event, which was held later in the year. 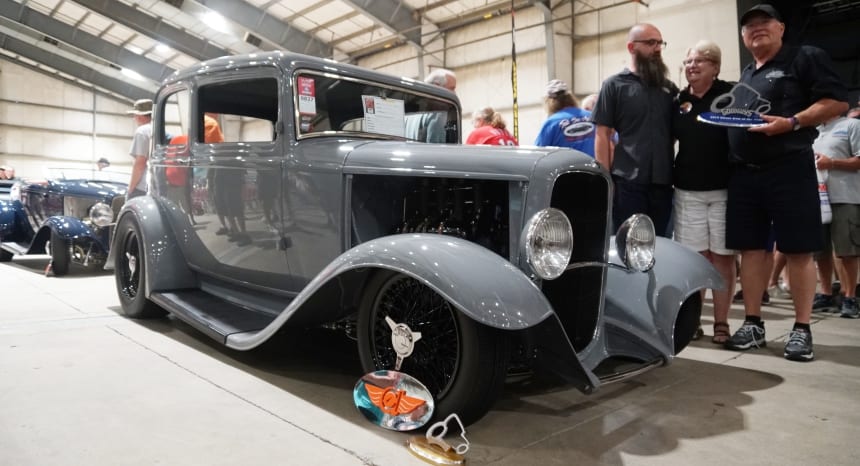 Another major award of the Goodguys Columbus show is the Street Rod of the Year.  Traditional pre-‘50s hot rods are pitted against each other in a competition that is ‘Old School’ rod building at its best.  These custom cars may look vintage, but there’s no shortage of new technologies and expert craftsmanship to make them truly exceptional.

For more about this award show, check out our article on the 2019 Goodguys Nationals in Columbus. 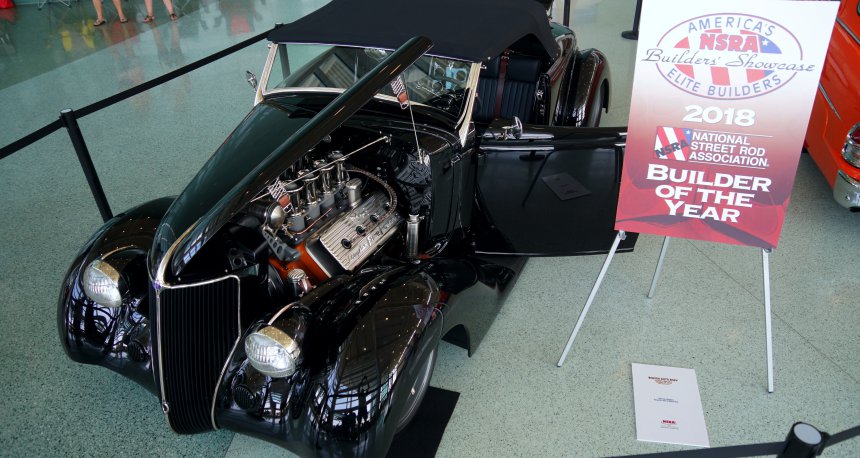 The NSRA, which hosts about a dozen classic car shows across the country, holds their flagship event in Louisville, Kentucky,   The show invites builders to showcase their latest creations, and attracts over 10,000 custom cars annually.  This event provides a unique opportunity for attendees to see many of the best custom cars in the country.   This elite display is judged by the National Street Rod Association, and one participant is awarded “Builder of the Year,” a major achievement in the hobby. 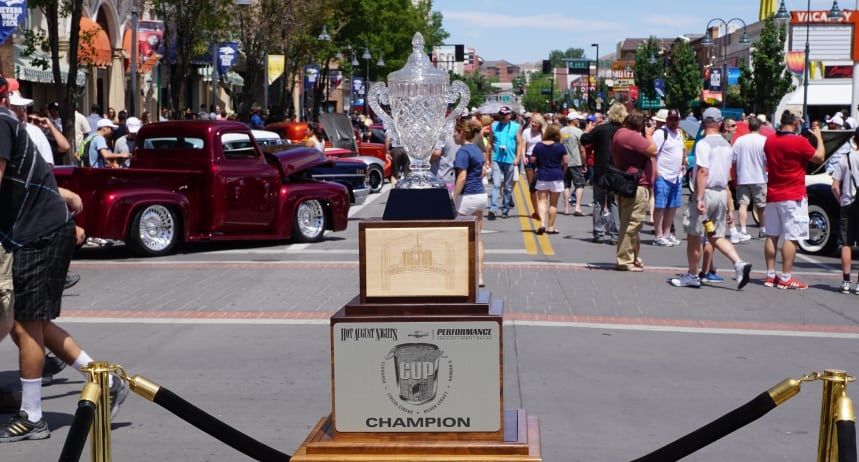 With all hot rods heading to the “Biggest Little City in the World” – Reno, NV – this is one of the best classic car street parties in the country.  All along the main strip, casinos host daily cars shows, and a parade of cruising cars travel from one show to the next.  Adding to the fun, some of the best custom cars come to Reno to compete for the Hot August Night Cup.  In previous years, this award was known as the Barrett-Jackson Cup.

For more about this award show, check out our article on the 2015 Barrett-Jackson Cup

9)  Best of Show Award
Show: Shades of the Past, Pigeon Forge, TN

The resort town of Pigeon Forge becomes hot rod central every Fall for the annual Shades of the Past car show.  Of course, anytime there is such a large gathering of classic cars, a contest to see who has the best vehicle is bound to follow.  Over the years, Shades of the Past has become a favorite stop on the show circuit for some of the top custom Builds.  Winning  the Best of Show here means you have competed against some of the best in the hobby and adds considerable prestige to your vehicle. 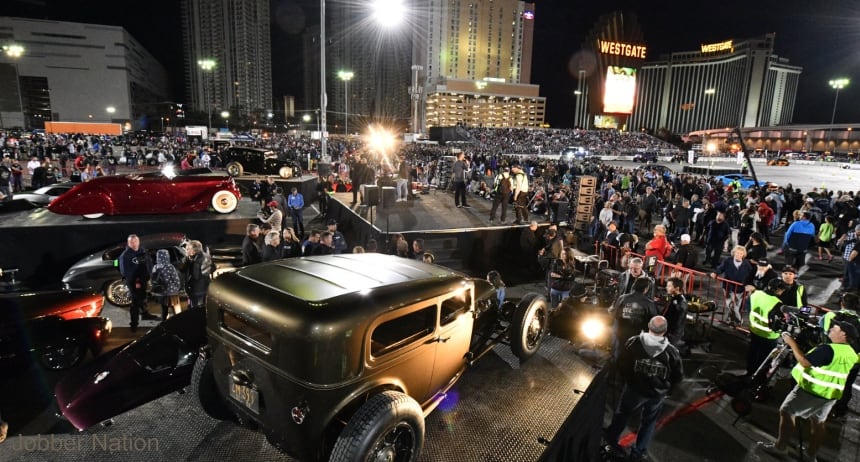 Battle of the Builder Finalist 2017

This massive aftermarket custom car trade show also draws top custom builds for the last major round of competition for the year.  In what has been named Battle of the Builders, the vehicle judged to best exemplify the integration of latest custom cars equipment receives the Builder of the Year award.

For more about this award show, check out this article on the 2019 Battle of the Builders.

Although SEMA was canceled in 2020, the Battle of the Builders competition was still held.    The winner, a 1963 Chevy Wagon called “Impressive,” also won the Ridler Award and Legend Cup earlier in the year. 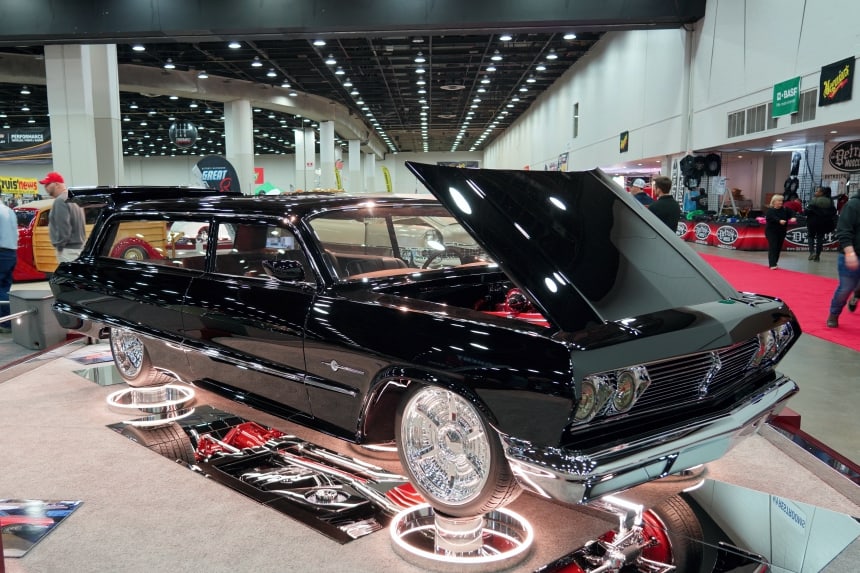 Note: The COVID-19 pandemic caused schedule and venue changes to many classic car events in 2020 and into 2021.  Several of the shows mentioned above were impacted but are expected to return to their traditional dates and locations in future years.