The Shelby Turbine Indy Car – Too Quiet for the Brickyard

When you grow up in Indiana, there is nothing bigger than the annual running of the Indy 500. It’s an integral part of the holiday weekend that kicks off the beginning of summer. Steeped in tradition and dating back to the start of auto racing in the early 1900s, the Indy 500 has been the launching pad for many legendary drivers and historically significant race cars. But, there’s one car that never ran a competitive lap around the famed raceway, yet it has a place in Indianapolis 500 history — not because of how it impacted Indy, but because of how it might have, if circumstances had been different.

The groundwork for this race car began in the early ‘60s when innovation was the name of the game, and teams were exploring new ways of going faster around the famed Brickyard. Just as the days of the front-engine roadster were numbered after Jimmy Clark broke through for the win in his rear-engine V8 in 1963, builders were beginning to look at alternate engine power, specifically gas turbines. However, it wasn’t until 1967 when #40, the STP Special turbine driven by veteran Parnelli Jones, came within a whisker of taking the checkered flag at the Indy 500 that these newfangled race cars were taken seriously. Listening to the announcer on that day, it seemed evident that “The Greatest Spectacle in Motor Racing” would soon be turning a page in racing, by transitioning from piston to turbine power. Parnelli in his turbine-powered car, was leading the ’67 race until the last three laps, when, with only 7 ½ miles to go, a $6 transmission bearing failed, causing his dominating race car to slowly coast into the infield. This opened the door for the “Tough Texan,” A.J. Foyt, who had been running in second place, to claim his third Brickyard win. However, for many, the race will be remembered as the time Parnelli almost won the big one in Andy Granatelli’s turbine car.

Although Parneilli’s likeness wasn’t added to the Borg-Warner Trophy that year, the race definitely demonstrated the turbine engine’s potential for supremacy in years to come. So, the race to build turbine cars began for the 1968 season. One obvious believer in turbine power was Ken Wallis, the designer of the STP Special. Ken wanted to design an even better turbine car, but he needed a new team to help him build it. Carroll Shelby, who had just added his magic touch to Ford’s winning GT40 program at Le Mans, was ready for his next success story – winning the Indy 500 in, what he believed would be the future, a turbine race car. Also, Goodyear, the primary sponsor, was influential in lining up drivers, defending Cam-Am champion, Bruce McLaren, and reigning Formula 1 champion, Dennis Hulmes. Now, with the “Dream Team” in place, the project was ready to move forward.

The team decided to build two race cars for the 1968 race. The cars followed the design layout of the previous year’s STP Special, with the turbine positioned midship, left of the driver, and, like its predecessor, it had 4-wheel drive. But, here is how the Shelby Turbine Indy Car, as it was later known, differed from the ’67 car:

It was cutting-edge technology ready to make its mark on the grand stage of the Indy 500. In fact, when the race car rolled off the carrier at the Indianapolis Speedway, Carroll Shelby described it as being the “…nearest to a certain winner ever built in the history of the race.” The team had every reason to believe they would have the fastest machine in the 33 car field. That is, until the rules of the game changed.

The power of the turbine race cars hadn’t gone unnoticed by the sanctioning body for the Indy 500 (USAC), and a decision had to be made to either allow continued turbine development, with their certain dominance over piston engines, or take action to try to level the playing field. In the end, USAC elected to change the rules, and they reduced the allowed air intake area for turbine cars by 35%. The rule change was devastating to the turbine power output, which was essentially cut in half. With this change, testing on the track indicated the Shelby Indy Car was underpowered and would not be competitive. Still, the designer, Ken Wallis, pressed on, working to overcome the air intake restriction handicap. With race day drawing near, and with all other options exhausted, a variable inlet annulus was installed to help improve the turbine’s performance, although this change risked violating the new USAC rule. In the final days of testing, leading up to the Memorial Day classic, even with this engine modification, it was questionable if the car would qualify, let alone have a chance to win. However, this became a moot point when word leaked to USAC of the variable inlet annulus engine mod. Rather than take the chance of outright rejection by USAC, the car was discretely withdrawn from competition.

If it had been allowed to run as originally designed, all indications are that this turbine-powered race car would have been very competitive. Nevertheless, despite not getting the opportunity to fulfill its potential of being the future of the Indy 500, it remains a significant technical achievement. It is an example of what might have been the new face of race cars contending for the big prize at the Brickyard. However, if USAC hadn’t put restrictions on turbine-powered race cars, there certainly would have been some unexpected consequences. Can you imagine after the announcer says: “Gentlemen Start Your Engines,” that instead of revving engines, you hear the swooshing of turbines? And, the excitement of hearing the field of race cars roar down the home stretch at the beginning of the race would certainly be diminished, and would be more like watching a silent movie. Perhaps there are just some traditions that shouldn’t be broken.

Mecum Auctions will offer someone the opportunity to own a significant piece of Indy 500 racing history, when one of the original Shelby Turbine Indy Cars go on sale at their 2014 Monterey Daytime Auction. The car, along with a separate display turbine engine, will go to the highest bidder.

Update: The Shelby Turbine Indy Car at Mecum Monterey reached a high bid of $450,000, but did not meet reserve. 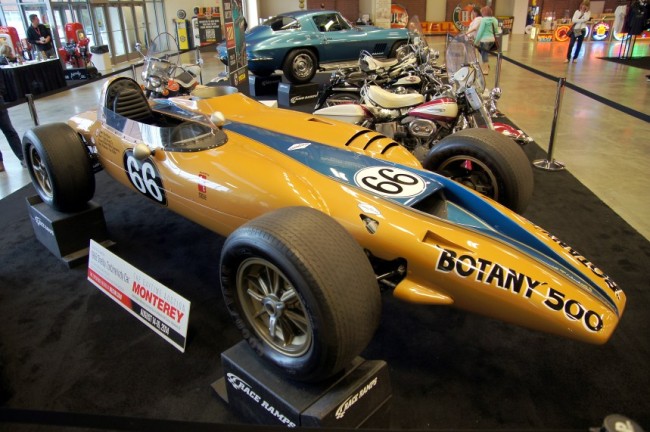 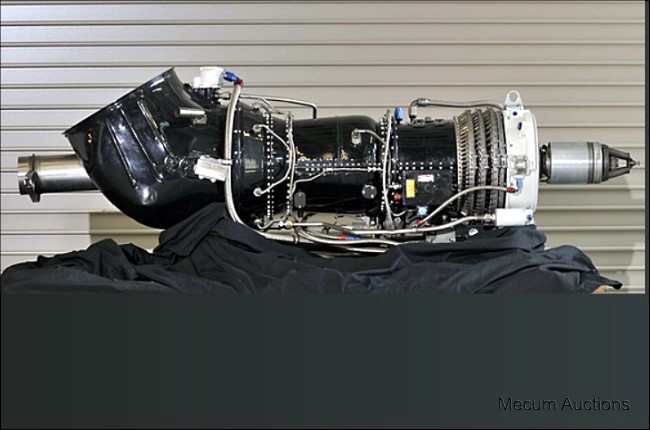 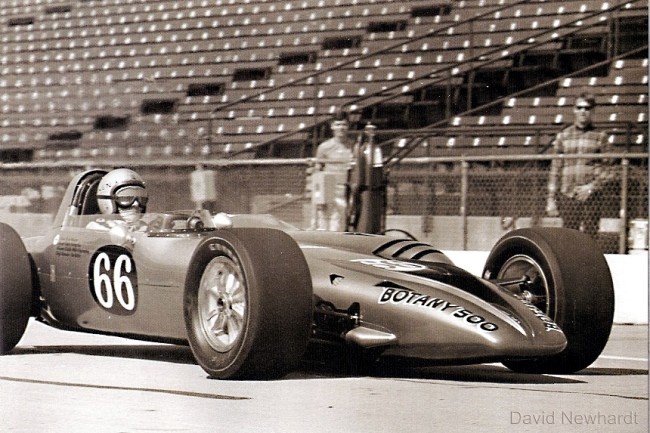