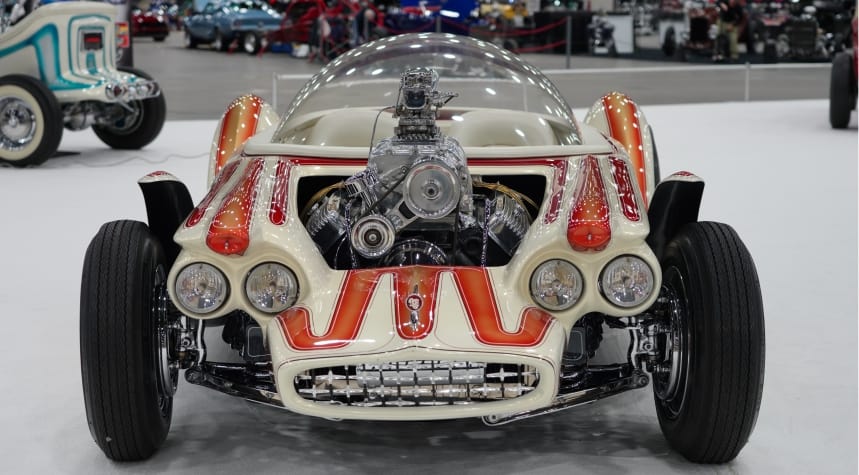 The history of hot rodding dates back to the 1930s in southern California.  Backyard mechanics stripped down older, mostly antiquated cars by removing fenders and making other modifications to lighten the car’s weight.   They also found ways to get more power from stock engines of the day (usually from flathead V8 Fords).  These homebuilt race cars could be driven on the street, or at least to and from the race venue.  And, for a decade, this was the center of the hot rod world.

After World War II, many of the returning mechanics began applying their skills to race cars.  As a result, the popularity of drag racing and hot rodding increased across the country.  At first, the blueprint used for building hot rods was the same the guys used in southern California in the 1930s – find the cheapest chassis available and install the hottest engine that could be built on a budget.  It wasn’t until the mid-50s that the idea of giving these souped-up machines some style began to appear.

This later era of hot rodding, which was called the Southern California’s Kustom Kulture, started again on the west coast.  Legendary names like Norm Grabowski, Ed Big Daddy Roth, Tommy Ivo, and George Barris were the rebel car customizers fueling this new craze.  Through ingenuity and imagination these guys initiated a true American art form by building some of the most iconic hot rods that amaze us even today. Chances are if you’re a baby boomer, you’re familiar with these cars, either from having one in your Hot Wheels collection or having built one from a Revell model kit. They are cool, outrageous, weird, and just plain fun.

Recently at the Detroit Autorama, we met Larry Roberts, aka “Pirate Larry,” who worked with Ed Big Daddy Roth in the 1970s.  Big Daddy inspired him to not only build his own custom cars, but to learn the artistry of “Rat Fink” drawing.  In the below videos, Larry talks about his mentor, Ed Roth and Ed’s gang of hot rodders.   This is an interesting look into what was happening in the SoCal Kustom Kulture, when Rat Fink ruled.

Special thanks to Larry for sharing his knowledge of the era.