Now in its 31st year, Dana Mecum’s Original Spring Classic car auction rolled into Indy with 2,000 vehicles offered for sale. Over the six day auction, motorized vehicles of just about every type crossed the auction stage, with a number of them being part of the 33 collections on the docket this year. Featured in the show were a couple of one-off, George Barris Era customs , as well as a 1967 L88 Corvette — a car so rare that it is almost mythical. Blue Oval royalty was also represented, as a third generation Ford GT took center stage, enabling one buyer to skip to the front of the waiting line for one of these supercars. Mopar flexed its muscle by giving buyers the chance to be the first on their block to own a brand new 2018 Dodge Demon. Five of these 840 HP monsters were available to bidders in multiple colors.

Here’s an pre-auction interview with John Kraman, Mecum Consignment Director and TV Analyst, who gave us a rundown of some of the star cars of the show.

Ford built only 250 of the third generation Ford GT during the 2017 model year. Even at a MSRP price of $450,000, there was (and still is) a waiting list of eager buyers vying for one of these super cars. So, it was a big surprise when one of these special cars showed up on the auction docket, a car that was otherwise unavailable to the public. The black striped Ingot Silver sports car, with only 7 miles, rolled onto the auction block escorted by armed officers. Final price to own this limited production Ford GT was $1,815,000.

One of the outstanding collections at the auction was the Keith Busse Indy 500 pace cars collection — sixteen corvettes in all, ranging from 1978 to 2017. Each car was either one of actual pace cars used on the track or a limited edition officially licensed by GM and the IMS – a collection that would be impossible to duplicate. The cars were sold as a single lot for $1,760,000. 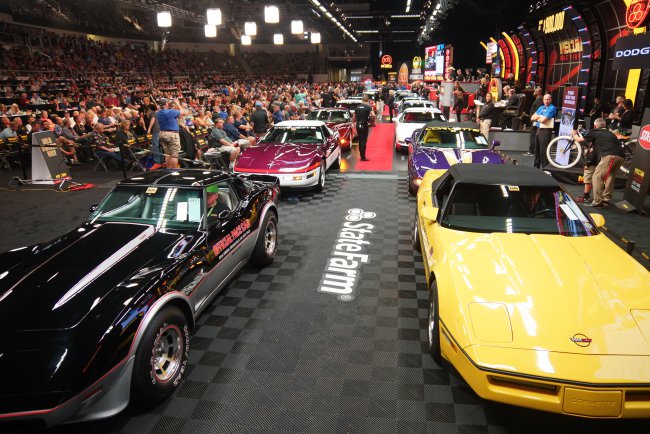 A one-of-a-kind George Barris creation, the original Golden Sahara was rebuilt from a damaged Lincoln in the mid 1950s. It was later sold to Jim Street, a passionate collector, who incorporated innovations such as in-dash television, fully remote opening doors, and luminescent wheels and tires. For a time, this crowd-pleasing car was featured at many car events, but in the late 1960s it vanished from public viewing, never to be seen again until making its appearance at the 2018 Spring Mecum Indy auction.

The Kookie’s Kar, a HOT ROD and Car Craft cover star best known for its role in 77 Sunset Strip, was even more radically changed. The Norm Grabowski creation, begun in 1952, is one of the most iconic cars in the history of hot rodding. After Street bought it from Grabowski in 1959 for $3,000, it was repainted by Larry Watson, and retrofitted in appearance similar to the twin-engine gas dragsters popularized during the NHRA’s infamous nitro ban. The car was given a pair of superchargers, monster-height chrome headers, dual rear slicks, and ISCA-style interior fur. Cool, man!

Both crossed the auction block at Mecum on Saturday night. Although there was some skepticism as to their marketability as collector cars, they each left the stage with new owners – the Sahara II selling for $385,000 and the Kookie’s Kar sold for $484,000.

This collection consisted of over a dozen award winning cars that had been judged to be the ‘Best of Show’ at prestigious Concours d’Elegence shows around the country. Many also wore AACA badges, including the highly coveted Grand Nationals emblem. All were convertibles and all were highly detailed throughout. There was no doubt they were the best of the best. Here is a sample of these elite show cars.

It’s impossible to talk about the great muscle cars of the ‘60s without mentioning the top tier L88 Corvette. Between 1967 and 1969, only 216 of these race-ready Vettes were built. Instead of rating the L88 at its actual output of 500 HP, for insurance purposes, it was underrated at 430 HP. These highly prized L88s, which rarely come up for sale, are often centerpieces of many classic car collections. The 1967 model is particularly valuable, since only 20 were built in the first year of production. In fact, we believe in the last five years, only four 1967 Corvettes have crossed the auction block (including this one at Indy). In the below video, Ken Lingenfelter, who is certainly no stranger to high-powered Corvettes, gives us his impression of this Sunfire Yellow sports car. On Friday night, it received a high bid of $1,700,000, but did not reach the reserve price. Click here for more on L88 sales in recent years.

Apparently, the guys at Dodge haven’t received the memo that the muscle cars era ended in the early ‘70s. In 2015 they unleased the Challenger Hellcat with a 707 HP power plant, and now they have everyone trading them in on the brand new 2018 Demons with 840 HP. Unfortunately, there are a lot more anxious buyers than Demons to go around, so Mecum tried to help by offering a total of five new still in-the-wrapper Demons, all with less than six miles on the clock. If you just had to have a Demon now, you could buy it (as long a you had the highest bid) in black, yellow, or even iconic Plum Crazy Purple. Of course, there was a premium price to pay above MSRP, which turned out to be $126,000 or more. Here are several of these demonic Dodges as they crossed the auction block.

For more about the Dodge Demon, click here for our walkaround interview with Steve Magnante.

All sales prices identified above include buyers’ commission.