It’s well known that Shelby Mustangs were produced in Fastbacks and Convertibles.  However, it isn’t as common knowledge that a limited number of 1968 coupes also received makeovers, with distinctive Shelby body parts. These Coupes, called the California Special and the High Country Special, were intended for regional markets only, the High Country Special selling in Colorado.

The distinguishing features of these Mustangs were rear deck lids and taillight modifications (similar to Shelbys), side scoops, rectangular fog lights, and unique badging. Less than 5000  were built in 1968, which in itself, makes them collectibles. In this same time period, Ford built a 390 V8 Notchback prototype Mustang, with similar rear end Shelby treatment. This Lime Gold Mustang, with deluxe Ivy Gold interior, was showcased nationwide to gauge public interest. After completing the show circuit, Ford decided not to move forward with this special Notchback program on a national level.  However, instead of scrapping the Notchback, it was sent to Shelby American to be used as a development platform to test new concepts.

Fred Goodell, chief engineer at Shelby American, and Carroll Shelby took personal interest in this experimental Notchback, which was rebadged as EXP 500. Several modifications were made to the Mustang, including a power plant upgrade to a 428 V8, a newly designed fuel injection system, independent rear suspension, and a unique rear disc brake configuration.     Augmenting its “Shelby look,” a new front grill opening and dual scoop hood was added, and it was repainted dark green.   With the color change, also came a nickname for this special Mustang –The Green Hornet.

Since Ford didn’t choose to mass produce The Green Hornet, the story of this experimental car could have ended there.  However, instead of being relegated to the crusher as were most prototypes, the Green Hornet survived, and quietly entered the public domain as a daily driver. Years later, it was rediscovered and restored to its former status as a one-of-a-kind experimental Shelby. Now recognized as one of the most historically significant Shelbys of all time, its value has skyrocketed. Although bidding reached $1,800,000 at the Barrett-Jackson Scottsdale auction in 2013, the Green Hornet didn’t meet the seller’s reserve price.  It’s anyone’s guess what the final selling price will be for this legendary Mustang.   It seems Carroll Shelby had a crystal ball when he decided to repaint the EXP 500 green — the color of money.

Fast forward five years: Another special prototype Shelby Mustang thought to have been destroyed 50 years ago was found in the back of a savage yard.  Dubbed Little Red, this 1967 Mustang, a sibling to the Green Hornet, is another Shelby GT 500 notchback sporting a snazzy vinyl roof.  However, Little Red was primarily configured with a supercharged 428 V8 and 3-speed automatic transmission, whereas the Green Hornet was fitted with a prototype independent rear suspension and fuel injection.  Although neither of these features made it into production cars of the day, apparently history has proven they were ahead of their time, since today’s Mustangs have both features.  Both cars have now been restored to their former glory, and are part of Craig Jackson’s collection. 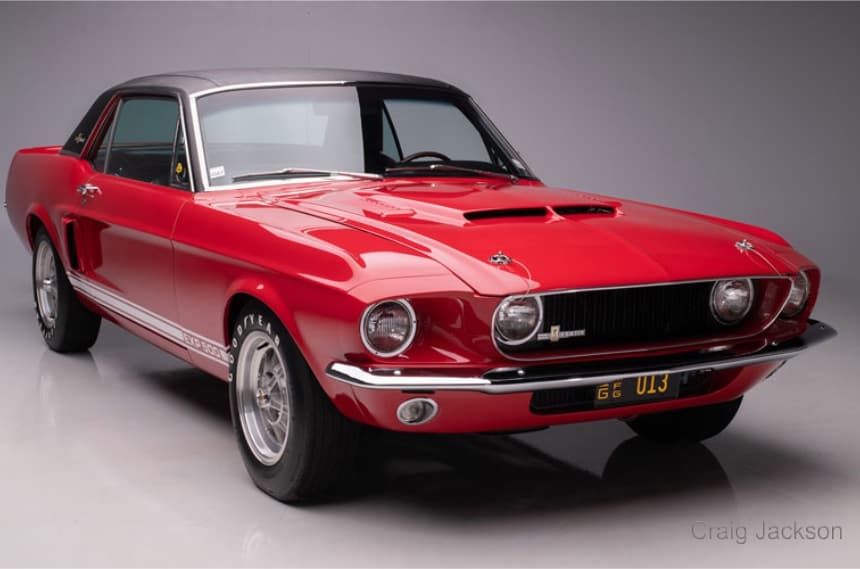