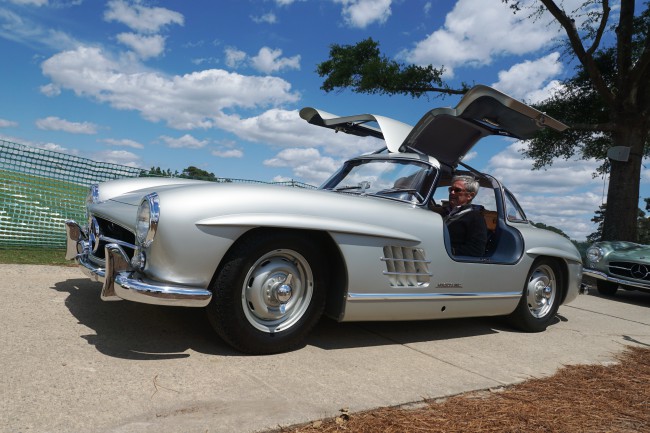 The 5th annual Pinehurst Concours d’Elegance, held on Saturday, May 6 at the Pinehurst Resort, literally had a dark cloud hanging over the event. Early morning weather forecasts were accurate, as rain – the nemesis of any outdoor car show – seemed to set in, threatening to put a halt to this celebration of cars. Many of the cars, some of which are worth as much as 8 figures, had probably never been in the rain, so, the question was: would owners expose their precious automobiles to the elements and would anyone brave the chilly temps and rain to see them if they did?  Fortunately, by late morning, patches of blue sky appeared and then splashes of sun. Soon thereafter the crowd started to arrive, and the 2017 Pinehurst Concours “field of dreams,” which consisted of over 300 cars, including some of the most significant vehicles ever shown at this venue, was underway.  Apparently, it’s true: “If you hold it, they will come.

This year’s winner was a 1925 Rolls-Royce Springfield Silver Ghost Picadilly Roadster, owned by Guy Lewis of Pinecrest, FL. This car was bought new by Howard Hughes for $13,450 at a time when a Ford Model T was selling for $275. Hughes, who was 20 at the time, ordered it with monogrammed luggage, a sleek lowered windshield, custom paint, and an extensive tool roll. It is one of only 79 Springfield Ghosts with a Picadilly body.

Checking Out Other Eyecatching Cars

Wrapping up the Show

There’s something for everyone at a Pinehurst Concours. Continuing a Pinehurst tradition, this year award-winning country artist Sara Evans performed live directly following the award ceremony. Beginning in 2015, the Concours wraps up with a concert. Previous performers were Three Dog Night and The Commodores.