As an original owner of a 1969 Candy Apple Red Mach 1, I jumped at the chance to read the recently released book, “Mustang by Design” – Gale Halderman and the Creation of Ford’s Iconic Pony Car. Although I was familiar with the stories of how the Mustang burst onto the car scene as the brainchild of Lee Icocca, I thought it was be interesting to learn more about the actual process and people including who actually penned the original Mustang profile. In this book “Mustang by Design” we learn it was Gale Halderman, still early in his career at Ford, but already an influential artist in Ford’s design studio. At the time it was just another assignment to Gale but as it turned out, it would give him a front row seat watching (and participating) in the birth of auto legend, the Mustang.

When the “Special Falcon” project came along, before it was known as a pony car, Gale and others in the studio were asked to come up with a car design that met three primary criteria: it needed to be targeted for the two-car young family, it should appeal to both men and women, and it had to be sporty – certainly a lot to ask for in one car. The following is the hand-drawn sketch Gale submitted in 1962 of the now iconic long hood/short deck design with his signature side scoop. His vision obviously won the day, establishing the DNA for a new car that would sell more than a million units in less than two years. 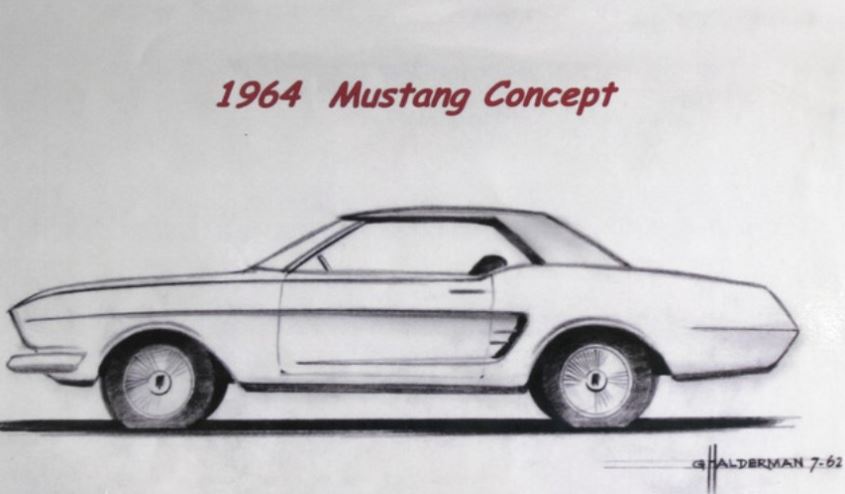 In the ’60s the Big Three automobile manufacturers were battling for market share which was all about getting buyers in the show room to see what was new. For Ford the stakes were particularly high after the Edsel disaster in the late ’50s. They needed a winner and what better way to get the word out than unveiling a sexy new sports car at the major summer event of the year — the 1964 New York World’s Fair? This put in motion an aggressive mid-year release but one that proved to be hugely successful. And of course this is why there is a 1964 ½ model followed shortly by the refined 1965 model. Gale was deeply involved in the pre-production process for each of these early pony cars. In this book he describes his personal involvement in this project and the dynamic workings of the FoMoCo organization to bring this new product to market. Gale then went on to leave his mark on many other Ford, Thunderbird, Mercury, and Lincoln models through his long 40 year career with Ford. To Gale this was just part of his job and he stressed that it was always a team effort by all the departments working together to produce a vehicle that not only appealed to the public, but was competitively priced. In the case of the fresh design of the Mustang, the team definitely hit a home run.

This 175-page book, with loads of historical photographs, is co-authored by two accomplished automobile journalists, James Dinsmore and James Halderman, who is a cousin to Gale Halderman. It is an informative and engaging read, particularly for anyone interested in the “Mustang Invasion.” It also gives a peek inside the workings of a major car company, including Gale’s interactions with many of the top brass at Ford, including the “Deuce” himself, Henry Ford II. This is not secondhand information, but directly from a guy to who was in the center of it all when it happened – Gale Halderman.

Regardless of your brand loyalty, the introduction of the Ford Mustang must be recognized as one of the most successful new automobile designs to ever come out of Detroit, and here is the inside story of what it took to pull it off.

The book was released in 2018 and is available at multiple locations on line including CJ Pony Parts.