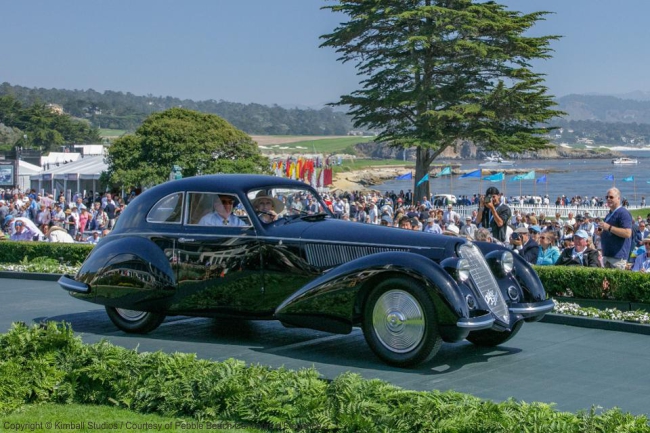 Looking for the crown jewels in the world of classic cars? You’re sure to find them every August in and around Pebble Beach, CA during a weeklong celebration, known as Monterey Car Week. The size, grandeur, and diversity of events held during Car Week has made this the most prestigious motoring festival in the country, and has been characterized as being where “billionaires play and millionaires just watch”- an apt description, with all the world-class four-wheel works of art in the shows and on the streets. But, you don’t have to be a millionaire to enjoy Monterey Week – you only have to be a car enthusiast.

It all started 70 years ago, when the Sports Car Club of America began racing on a private road through the Monterey Peninsula. The race soon attracted a racing entourage that brought some of the finest production cars of the day. A few years later, in 1950, the first car show was held, featuring these production cars. Initially, there was only a field of 30 vehicles, but over the years, this little car show has become one of the elite car events of the year – the Pebble Beach Concours d’Elegance.

The Race, which has since been moved to nearby Laguna Seca Raceway and is now known as the Monterey Motorsports Reunion, and the Pebble Beach Concours are the cornerstones of Monterey Car Week. However, as tens of thousands of visitors descended upon this picturesque peninsula on the California coast, a series of related events were added over the years to expand the automotive festivities. These events include specialty car shows, automobile tours, and auctions — all leading up to the grand show on the 18th fairway of the Pebble Beach Golf Links. Simply said, the Pebble Beach Concours d’Elegance is the most famous gathering of premier automobiles in the world.

Carmel-By-The-Sea Concours On The Avenue

One of the more recently added events of Monterey Car Week is “Concours on the Avenue,” held against the backdrop of attractive downtown Carmel. Entrants include Luxury Cars, Muscle Cars, Hot Rods and Sporting Cars. This is a great opening act of the weeklong automotive extravaganza.

1966 Lamborghini, Best of Show, Concours on The Avenue

For more about The Concourse on the Avenue, click here.

This car show welcomes a total of 100 vehicles 25 years or older, including micros, minis, and arcane vehicles of the model year 1993 and older. Only combustion powered vehicles are allowed with displacement limited to 1,601cc engines.

Following the car show, there was a tour/parade around the city’s scenic waterfront and beaches. 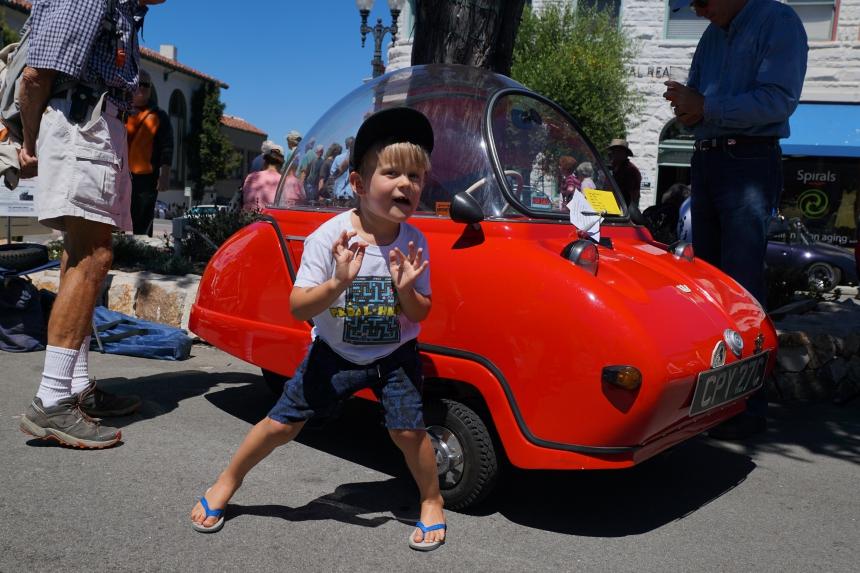 The annual Rolex Monterey Motorsports Reunion is a celebration of motorsport history, featuring approximately 550 race cars competing on the 2.2 mile Laguna Seca road course. The cars that compete are accepted based on the car’s authenticity, race provenance and period correctness. Formula 1, Can-Am and Trans-Am were among the 15 classes featured at the 2018 Motorsports Reunion. 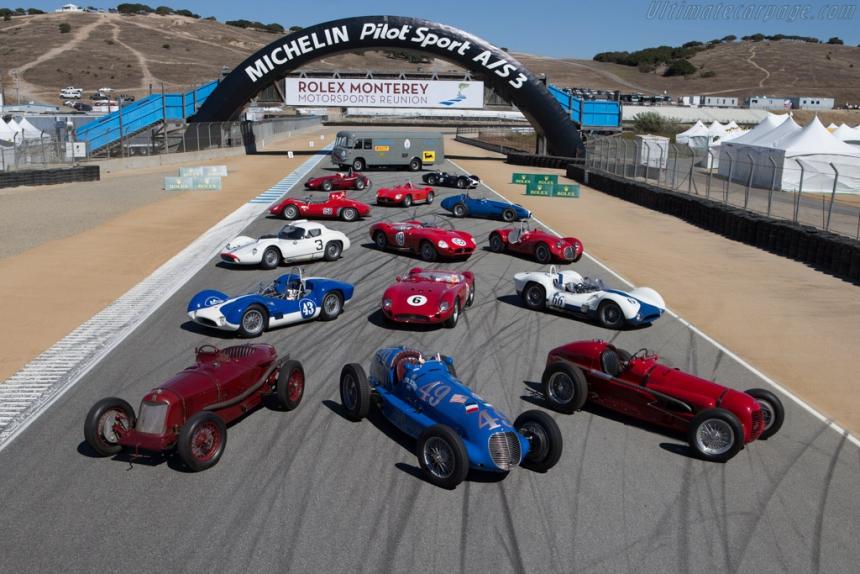 The Quail, A Motorsports Gathering

For 16 years, The Quail, A Motorsports Gathering has provided an unparalleled and exclusive experience for motorsports enthusiasts and collectors from around the world to enjoy rare collections of fine automobiles and motorcycles in a garden-party setting on the rolling greens of Quail Lodge & Golf Club.

Best of show went to Anne Brockinton for her 1953 Lancia Aurelia PF200C.

Well, not everyone is vying for the Best of Show at the Pebble Concours d’Elegance. Known as the car show that “Celebrates the Oddball, Mundane, and Truly Awful of the Automotive World,” more than 100 cars competed to be the worst of the worst. As the below award titles suggest, the Concours d’Lemons provides an opportunity to kick back and poke some fun at the ultra high-end vehicles typically seen around the Monterey Peninsula.

This unique event focused entirely on the Super, Hyper and Exotic Car phenomenon. Against the backdrop of historic Cannery Row, this unique car show showcases some of the rarest and exciting cars of our time.

The auctions leading up the Pebble Beach Concours are major attractions during Monterey Car Week. Some of the rarest and most coveted vehicles cross the auction block in and around Monterey, with bidding starting in the millions of dollars. This year two particularly noteworthy records were broken, with the all-time highest price paid at auction, $48.4 million, for a 1962 Ferrari 250 GTO, and for the most expensive American car sold at auction, a 1935 Duesenberg SSJ Roadster for $22 million. Here are highlights from the top six auction houses at this year’s Monterey Car Week. All prices include buyer’s sales commission. 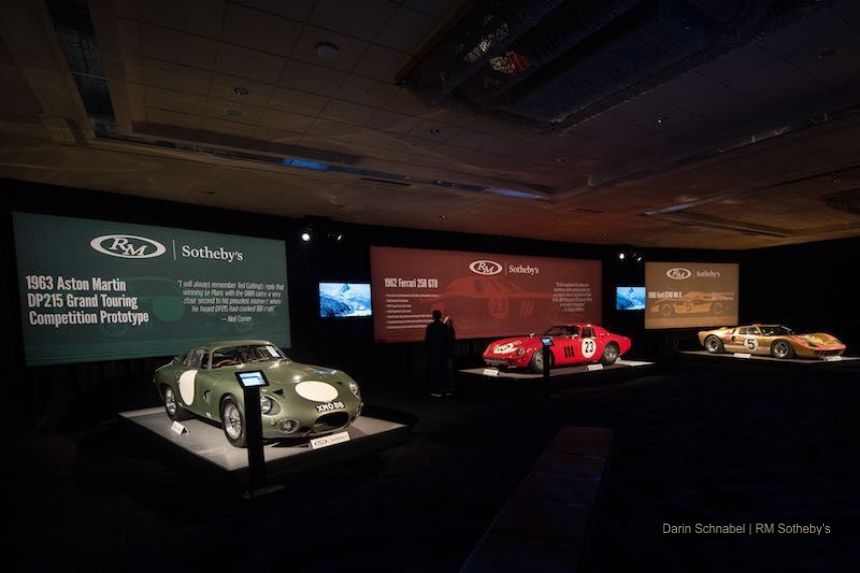 At $157.9 million, RM Sotheby’s had the honor of achieving the highest cumulative sales of all the auction houses during Monterey Car Week. They also had bragging rights for selling the highest price car, the 1962 Ferrari 250 GTO, which has become the most expensive car ever sold at an auction. Here are their top three sales:

Both the second and third place highest sales were for historic race cars, with the GT40 being the third place finisher in the Ford 1-2-3 sweep at the 1966 LeMans.

When Gooding and Company’s sales were tallied, they brought in $116.5 million, and had the distinction of setting a record for the highest priced American car ever sold at auction, a 1935 Duesenberg SSJ Roadster. The top three sales at Gooding and Company were:

The 1935 Duesenberg SSJ Roadster was originally owned by film legend Gary Cooper. Only two of these sporty Duesenbergs were ever built. The other one was owned by Clark Gable.

Third in overall sales, Mecum reported $47 million for their three-day event. Their top three sales were:

Coming in fourth in overall sales was Bonhams at $37.7 million. The three cars at the top of the leaderboard were:

Total sales for Russo and Steele were $7.3M. Top three sales were:

Interestingly, the 2017 Ford GT was the infamous car that Ford is suing WWE superstar John Cena for his breach of contract. 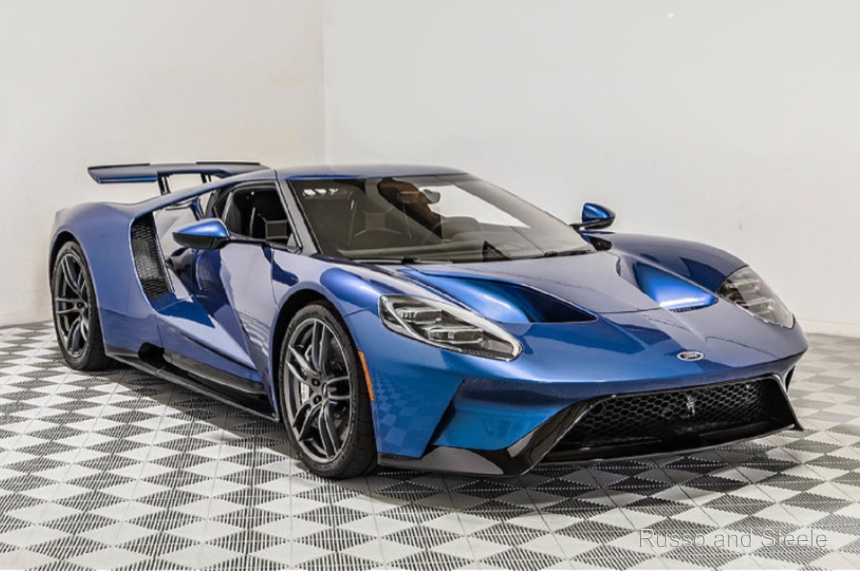 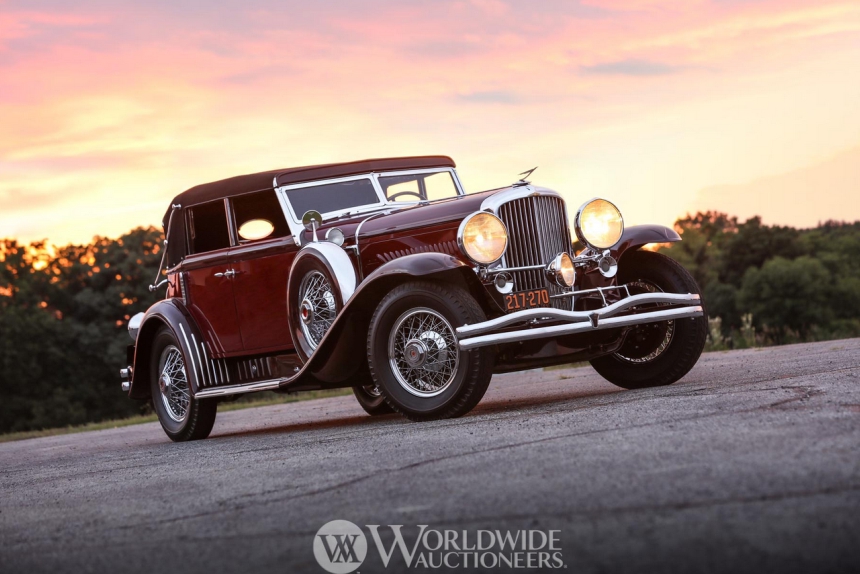 The Tour d’Elegance, which started in 1998 to showcase the elegance of the automobile in motion, and to underscore the early history of Pebble Beach, is now in its 21st year. This annual picturesque trip around the Monterey Peninsula, which starts at the Pebble Beach Equestrian Center and ends with a parade stop at Carmel-by-the-Sea, is open to vehicles participating in the Pebble Beach Concours d’Elegance. This year over 175 historic automobiles took this scenic route.

Vehicles that complete the tour earn extra points, so if two cars in the Concours d’Elegance are tied for Best of Show, then the winner could be decided on whether the cars participated in the Tour.

The Pebble Beach Concours, which started in 1950, is now the top-ranking collector car competition in the world. It is also the event to which most other modern Concours trace their roots. It has taken the lead by including racing greats and offering featured marques and special classes as early as 1953, introducing displays of dream cars and concepts in the 1980s, and instituting driving events and emphasizing the importance of preservation in the 1990s.

Thousands of spectators reveled in the beauty and elegance of their surroundings at the 68th Pebble Beach Golf Links, where 200 elite classic vehicles were judged for their style and technical merit, as well as their history, their originality and the accuracy of their preservation or restoration. Although the show field was full of winners, only one car in this premier field of rolling art could be crowned Best of Show — this year it was a 1937 Alfa Romeo 8C 2900B Touring Berlinetta, owned by David Sydorick of Beverly Hills, California. In a statement, David describes his dark blue Alfa Romeo as “… a piece of automotive architecture mounted on a Grand Prix chassis that has technology that was top of the line for prewar cars. It’s a wonderful combination. It’s beautiful from top to bottom.” Obviously, the Concours judges agreed with him.

Final Three for Best of Show

Other news from this year’s event included a once in a lifetime gathering of 12 Tuckers and many more individual historical classics. A 1937 Cadillac Series 90 Hartmann Cabriolet with French ‘Delahaye type’ styling received quite a lot of attention. The buzz from the show field was that it might very well take Best of Show, but it had to settle for a class win only this time around. Here are some of the class winners, plus a group of one of the special marques at this year’s Concours (The Tucker).
1929 Mercedes-Benz 710 SS Barker Tourer Race Car