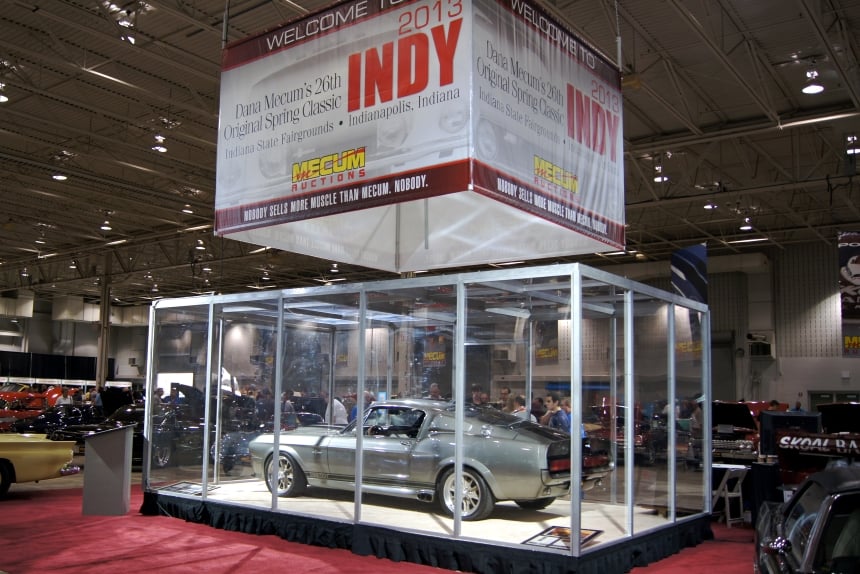 The universal popularity of Mustangs makes any pony car collectible, but some are more sought-after, with a few even being true celebrities. We’ll start with Blue Chip Mustangs first, as we ascend the Mustang hierarchy. Here are the cars that have become iconic examples of the breed, but have not yet reached the 7-figure mark.

First up, the very popular first-generation Mach 1 was a special trim package that dressed up fastback cars with air scoops, stripes, blacked out hoods, and deluxe interiors. Because of the large number of Mach 1s sold, available supply generally kept the market value down. However, recent auction sales show a steady climb in price, with higher-end restorations selling for more than $100,000, including 351 cid small block cars.

During Ford’s “Total Performance” advertising campaign in the ‘60s, Mustangs were a favorite platform for drag racing.  Two significant examples are the World Champion, a 1965 Mustang, driven by Gas Ronda, and the Winternationals Superstock Champion, a 1968 Cobra Jet Mustang, driven by Al Joniec. In 2018, the ’65 Mustang sold for $324,000.   At the same auction, the Cobra Jet received a high bid of $250,000, but didn’t sell because it was below the seller’s reserve.

The first Mustang produced (serial number 001), as most prototype Mustangs, remain in FoMoCo’s corporate collection, and therefore, we may never know their market value. However, there is one car from the early days of the pony car’s development that has exchanged hands in public – the 1964 1/2 Mustang III, commonly referred to as the “Shorty Mustang.”  As the name implies, it was built with a shorter wheel base to be a true two-seat sports car.  The design never made it into production, because Ford Marketing determined a four-seater is what the public really wanted.  Nevertheless, this rare concept Mustang gives us an idea of what a car from the early days of Mustang is worth.  In 2015, “Shorty” sold for $511,500.

Any time Carroll Shelby’s name is associated with a Mustang, it’s a game changer.  Back in the day, his GT350 and later GT500 street cars were the high-end models of the breed.  Today, these cars are highly collectible, and many easily generate 6-figure bids at auctions.  Meanwhile, on the track, Carroll’s shop produced a number of race-ready Mustangs that dominated sports car racing in the mid-to-late ‘60s, the most famous being the 1965 GT350R, driven by Charlie Kemp.   This Mustang racked up 17 straight wins from 1968–1969.   In 2014, this fast pony sold for $984,500.

Only a handful of cars in the Mustang family have reached the seven-figure plateau. These are beyond-rare cars that are 1 of 1, making them extremely valuable. Here are the current Mustangs that have gained the Million Dollar (MD) club status.

In the late ‘60s, Ford asked Carroll Shelby to work on potential upgrades to Mustangs, such as supercharging, fuel injection, and independent rear suspension.  For this development work, Shelby was given a couple of notch-back Mustangs, a 1967 and a 1968, later dubbed Little Red and Green Hornet.   Both cars were sold to the public after being used for test beds.  For many years they were thought to be lost to the crusher, but fortunately, they were found and restored to their former glory.

In 2012, the Green Hornet crossed the auction block, reached a high bid of $1.8 million, but ultimately didn’t sell because the seller’s reserve was not met.  Little Red, which hasn’t yet been placed on the market, must be close in value to its Shelby sibling.  So, for now, Green Hornet and Little Red are honorary members of the MD club.

In 2000, the high-octane movie, “Gone in 60 seconds,” was released.   Its star, Nicolas Cage, drove a customized, 1967 Mustang called Eleanor.   Of the several Eleanors built for the movie, half were destroyed in production, but one of the survivors that was used as the Hero Car (the car with close-up shots of Cage driving), sold in 2013 for $1 million.  Don’t be surprised if you see a car that looks a lot like Eleanor at any car show.  The design has become so popular that a number of clones have been built to capture the excitement the movie car generated – “Go Baby Go.”

Created as the test vehicle for a new line of Goodyear tires (Thunderbolts), Carroll Shelby, himself, clocked the Super Snake at 170 mph on the test track.  There was hope that this 600+ horsepower Mustang, with its GT40 bred 427 engine, would be the first of a new line of Shelbys, but the cost to produce this super car in volume was prohibitive, making it the only one of its kind.  At an auction in 2013, it sold for $1.3 million, and later in 2019, it resold for $2.2 million.

Any movie starring Mr. Cool himself, Steve McQueen, is a blockbuster.  Add in an iconic car chase scene through the streets of San Francisco, and the movie becomes a motor head favorite.  McQueen’s co-star was a 1968 Highland Green Mustang GT, which itself became an inspiration for clones and Bullitt-option packages from Ford in 2001 and later model years.  Two cars were created for the 1968 movie, but only one survived the action scenes.  The surviving car was held privately for 45 years before it became the center of attraction in a highly-charged sale in early 2020.  The final price for the original Bullitt was $3,740,000.

Records are made to be broken, and just when we thought nothing could top the huge Bullitt sale, along came another one of Carroll Shelby’s originals.   The 1965 prototype Shelby GT350R Mustang that started the legendary race program for Shelby American is the most desirable of all Carroll Shelby’s pony cars.  This was first proven in mid-2020 when it sold for a staggering $3,850,000, making it, at least for a while, the “King Mustang.” However, the story didn’t end there. In 2022, it crossed the auction block again, and was sold for $3,750,000. Although this is down from the 2020 sale, it still is the highest priced Mustang sold at auction.

Table of Mustangs Bid or Sold for $1 Million or More

Check back as we update this table with changes to the Million Dollar Mustang Club.