The Oscars of classic cars, the Grand National Roadster Show (GNRS), was held on January 24 – 26 in Ponoma, CA.  With its 9 foot trophy, colorful Oscar-like statuettes, and top-of-the-line custom builds, this event is part classic cars and part Hollywood. Now in its 71st year, the GNRS is the longest running indoor car show in the world.  Over the years, the show has evolved from a small gathering of hot rodders to one of the biggest and most anticipated shows on the classic car calendar.  It always draws some of the top custom builders, as well as locals, who want to show off their coveted machines.

This year, more than 500 vehicles competed for various awards – the most coveted being the America’s Most Beautiful Roadster (AMBR) award.    For many builders and owners, winning this award is their ultimate goal.   Another major award at the Grand Nationals, the Al Slonaker Memorial Award, which is essentially a “Best of Show” award, is given to a non-roadster entry.   Separate from the AMBR competition, it is also a highly prestigious award that recognizes the top non-convertible at the show.

This year’s award went to a 1932 Ford Roadster, owned by Monte Belsham and built by Jerry Kugel. As well as taking home a cash prize of $12,500, the winner will have their name added to the 9 1/2 foot tall trophy, with some of the best builders in the world, including legendary builders like George Barris, Andy Brizio, Boyd Coddington, Barry White, Troy Ladd and Chip Foose. 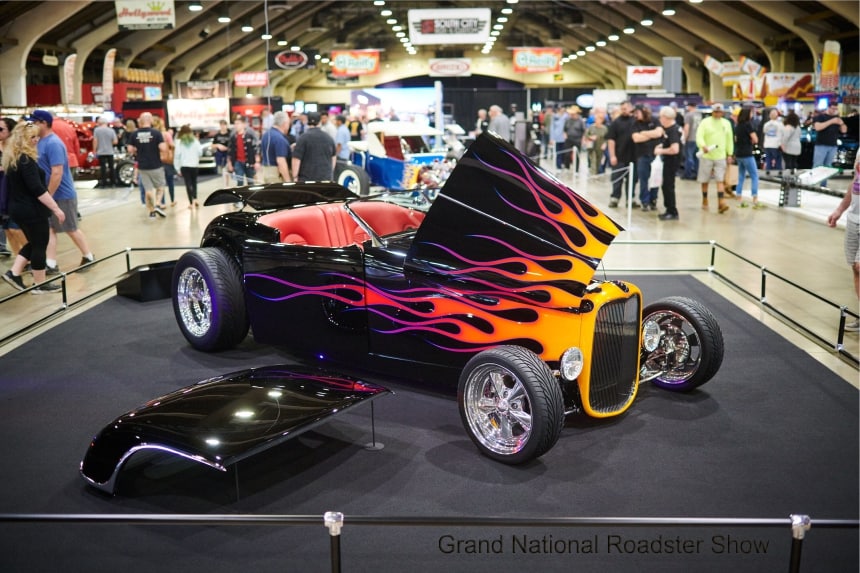 Ten finalists competed for the crown of America’s Most Beautiful Roadster (AMBR) Here are the other nine vehicles in contention for this coveted award.   Below photos were provided by Cars On Line. Click here for their onsite coverage of the event.

A 1936 Willys Model 77 won the best in show, non-roadster award (Al Slonaker Memorial Award), at this year’s GRNS.    Owned by Ron and Vicki Ernsberger and built by The Tin Man’s Garage, it features a 498 cubic inch V6 Hemi, which is certainly a head-scratcher. This is an all-aluminum Arias motor, producing 800 HP (reported to be just 1 of 5 such V6 power plants).

Check Out these Books.