If you follow today’s top custom built cars, you’ve probably heard of George Poteet. This self-described “Hot Rodder at Heart” is an owner of a large collection of classics and one-off vehicles that have won some of the most coveted awards in the hobby. Here are some of his commissioned builds that have been on the show circuit in recent years. Recognize any of these?

Being the owner of the above award winners, as well as other classics like these, would be enough to satisfy most auto enthusiasts, but this is just half the story for George Poteet. His other passion is speed racing at the legendary Bonneville Salt Flats. Over the last 25 years, George has piloted specially-designed racers to ever increasing speeds. Think a new Bugatti Chiron Sport going 260 MPH or a Top Fuel dragster running 335 MPH is fast? Well, as early as 2009 George was officially posting 400+ MPH runs, exceeding this mark more than 40 times in his motorized land rockets. In fact, he has driven the fastest piston-powered car for the last nine years at the Salt Flats. This includes his record-setting run at 462.345 MPH in 2011. However, a true hot rodder always wants to go faster, so George will be taking his “Speed Demon” racer back to the Salt Flats again this year to try to push the envelope a little farther. We were lucky enough to talk to George at the 2018 Detroit Autorama, where he had the “Speed Demon” on display. A huge thanks to George for giving us a walk-a-round narrative of his awesome machine and to hear from the guy who definitely has the right stuff.

Bonneville Racing segments in the above video, were recorded by Speed Demon Racing. 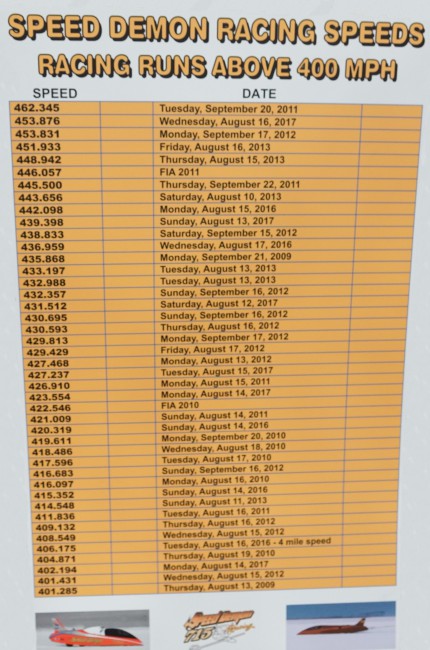