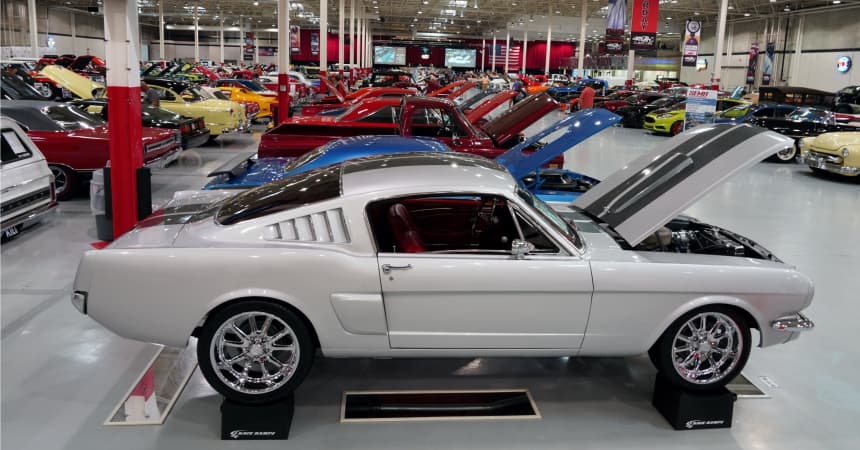 “The Palace” in Greensboro, NC was rocking again for the GAA Classic Cars Summer sale.  More than 600 vehicles were on the docket at this three-day event, with a reported 91% sell-through rate.

The second-highest seller, a 1958 Corvette Restomod, was involved in a bidding war that ended when the hammer fell at $190,000.  Reportedly, the winning bidder was from Saudi Arabia, so apparently, GAA Classic Auctions has gone international!

Another highlight of the auction was a 1951 Ford Crown Victoria Custom, which was auctioned to raise money for the Scott Hamilton’s CARES Foundation.  See below for more about this charity sale, as well as a look at several of the eye-catching vehicles that crossed the auction block.

Scott Hamilton, the 1984 Olympian Gold Medalist, was on hand to promote his Cares Foundation Charity, which provides funding for cancer research.  Scott told the audience about the thrill of winning his ice skating competitions, but also the agony he felt when he was diagnosed with cancer.  Now, he wants to do what he can to help others overcome cancer, and through his Foundation, he is doing just that.   The charity car, a 1951 Ford Crown Victoria Custom, sold for $55,000, and through the many donations of the auction attendees, more than $100,000 was raised for his worthy cause.

Scott Hamilton Talks to the Audience About His Cares Foundation Charity