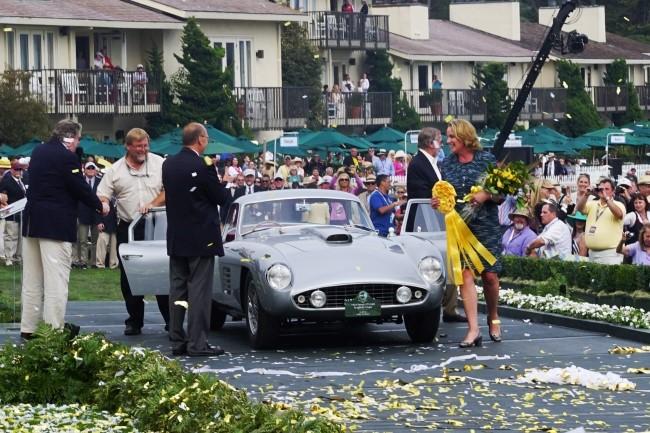 In a week where the Ferrari marque could do no wrong, the 64th Pebble Beach Concours d’Elegance added yet another title to the Italian car maker’s list of accomplishments – Best of Show.   The 1954 Ferrari 375 Scaglietti Coupe, owned by Jon Shirley of Medina, Washington, is one of only five such examples in the world and was once owned by famous film director Roberto Rossellini.   Significantly, this is the first post-war car to win Best of Show at Pebble Beach since 1968, and even more amazingly, the first Ferrari to ever win this award in the long history of Pebble Beach. This super, rare sports car bested the three other finalists, which were a 1937 Rolls-Royce, a 1934 Packard, and a 1934 Hispano-Suiza.   So, in an event where elegance and style typically trump race cars, regardless of their significance, the Ferrari’s win was certainly unexpected.

Ferraris are in Demand

Ferrari played a dominant role in this year’s Concours, not only because the marque won Best of Show, but because there were a record number of Testa Rossas on the show field.  Having two or three in one place is unexpected, but to be able to see 20 of these rare cars at one time is unheard of.  It was quite a sight, as thousands of attendees jockeyed for their positions to witness history in the making

Providing additional testimony to Ferraris’ popularity, only a few days prior to the Concours, a 1962 Ferrari 250 GTO sold for a record-breaking $38.1 million at Bonhams in Pebble Beach.   It’s also common occurrences to have multi-million dollar sales of vintage Ferraris at Gooding & Company, RM Auctions, and Mecum.

Perhaps next year, Monterey Car Week should be changed to Monterey Ferrari Week.

Here are the finalists and the winner of the 2014 Pebble Beach Concours Best of Show.

Four Finalists for Best of Show