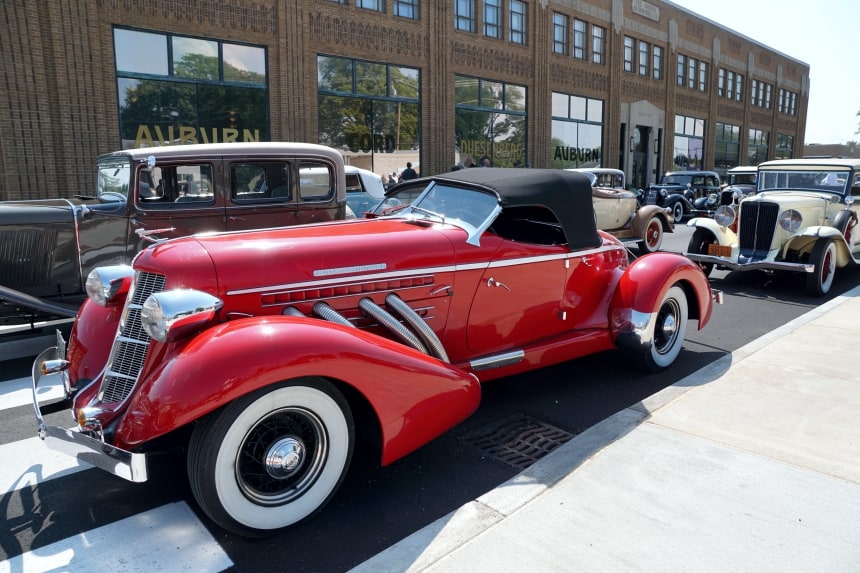 The Auburn Duesenberg Cord (ACD) Museum, located in the former headquarters of the Auburn Automobile Company in Auburn, Indiana, is a perfectly preserved time capsule of motor cars produced during the boisterous and turbulent late ’20s and early ’30s. As you step inside the art deco showroom, which contains the largest and most impressive display of Auburns, Cords, and Duesenbergs in the world, it isn’t hard to imagine being greeted by a suave salesman, in a snappy bow tie. This former showroom, turned museum, is the perfect setting to experience the luxurious cars of this era. After visiting the ACD Museum, you’ll agree, “They sure don’t make them like they used to.”

The History of the Auburn Automobile

The Auburn Automobile Company was in operation from 1903 to 1937, with its pivotal year being 1924. This is the year that a new general manager, E.L. Cord, joined the company. Within two years, Cord, a dynamic salesman, bought the company, and spearheaded a period of rapid growth. In 1929, he introduced a new automobile, naming it after himself, and that same year, he acquired the ailing Duesenberg Automobile Company. His desire to stay on the cutting edge of technology greatly influenced everything from body construction to the decision to include front wheel drive, super charged engines, retractable headlights, and hydraulic brakes. He also assembled a team of gifted body stylists, who were responsible for branding the company’s luxury cars, the most recognizable being the Duesenberg. Although all manufacturing ended in 1937, the Auburn Automobile Company has the distinction of creating some of the more legendary cars, whose appeal is still strong today.

Inside the ACD Museum

As you browse through the museum, you’lll see a large selection of ACDs. My favorites were the Cords, but all of the cars are immaculate examples of the cars manufactured by Cord’s company. The museum has one-of-a-kind prototypes, cars owned by celebrities of the day, and some that have historical significance. Some of the cars were bought by the museum, but many were donated by car collectors who chose to share their passion with other car enthusiasts. Alongside each car is a plaque with details of the vehicle, including its ownership history. A grand, double-wide staircase leads from the ground-floor showroom to the upper levels, where you’ll find, among other car exhibits, the Hall of Technology, Design Studios, Cars of Indiana, and the Gallery of Classics, which was Auburn’s competition of that era. These exhibits are located in office areas originally used by the company’s operating departments and top management, adding to the realism of the museum experience.

The museum is open daily from 9 a.m. to 5 p.m., except for Thanksgiving, Christmas, and New Year’s Day. Tours are self-guided, with staff members on hand throughout the Complex to answer questions.  Since hours are always subject to change, we recommend you check with the website prior to visiting the museum.

For a walking tour through the museum, follow this link to our video.