The laid-back resort area on Amelia Island is transformed each spring with the arrival of 18-wheeled transports ferrying in hundreds of classic vehicles from around the country and some from overseas. Part of this automobile royalty is taken to one of the five auctions held around the island and others are staged for the main event at the 18th fairway of Ritz Carlton Golf Club, the Concours d’Elegance. This year, with inclement weather predicted on Sunday (the scheduled day for the show), the Concours was moved to Saturday, which turned out to be a perfect day for the outdoor event.

Every year, the Amelia Island Concours honors one of the legendary members of the automobile sports world. For 2017, Al Unser, Sr., four-time winner of the Indianapolis 500, was chosen as honoree. The cars from each of these wins were on the show field, along with the famous Borg-Wagner Trophy, straight from the Brickyard Museum. Other headliners at this year’s Concours were 11 Jaguar D-Type roadsters, including the 1956 and 1957 Le Mans winning cars; the rarely-seen Marmon marque, 8 in total, which had its own class this year; and the first Camaro built, a 1967 coupe VIN 10001. Since this year was the 50th Anniversary of Chevy’s pony car, VIN 10001 was joined by its later-year stablemates, including iconic names like Yenko, COPO, and Motion, as well as other significant Camaros.

If you’re a car buff and a movie lover, The Cars of the Movies, a new class added to the Concours this year, was a “must see.” Cars such as the 1964 Aston Martin DB5 that Sean Connery drove in the 1964 Goldfinger movie; the Porsche Gulf 917K from Steve McQueen’s 1971 film, Le Mans; Elvis Presley’s 1959 Corvette XP-87 Stingray Racer, which he drove in Clambake (1967); and American Graffiti’s 1958 Chevrolet Impala were on the show field for all to enjoy.

Sights and Sounds of the Concours 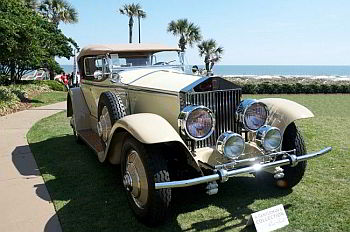 There are several auctions held during Amelia Island Auction Week. Here are the highlights from three of the auction houses.

*The 2017 Concours was held on Saturday, March 11 instead of Sunday because of impending inclement weather.